What do you think of when you hear the word «encounter»? Does it make you think of a counterpart or of the tension between closeness and distance? Of familiarity and intimacy? And why do we feel something when we look at art? This blog format needs your participation, dear reader! What are your experiences in encountering art? How has art moved you, taught you something, or shocked you, and why? Tell us about it, and we will be happy to publish it in the new blog series «Art Encounters». The blog itself should become a place of encounter, through which people can exchange ideas, react to each other and to art. Send us an email at hello@art24.world with your story. We are looking forward to reading about your experience.

What Does the Encounter with Art Do?

This introductory text is meant to serve as food for thought for your own experience report. In it, we will approach the vague, ambivalent, the always debatable and the change of time dependent understanding of what makes an object of art to art, in order to understand why the encounter with art touches us.

The encounter with art has always been the subject of philosophical debate. For the philosopher Emmanuel Levinas, it had an ambivalent role. Mostly, however, he saw it as an insufficient relationship. The encounter with art lacked the immediacy, in contrast to the encounter with an other (cf. Stähler 2007). For there is already a dual relationship in reality; that which reality is and that which is itself something alien to it. Art expresses this relationship only as its shadow and thus withdraws itself from us. For Levinas, it can never capture «reality» and thus remains without a future, since it merely repeats the past (cf. Stähler 2007). Is this justified, or has Levinas missed something? After all, in presumably no phenomenon of reality the entire truth comes to light. Doesn't art show the variety of possible perspectives and sides of reality precisely through the absent? Are there even parallels between the encounter of human beings and art and the encounter between humans? And can the encounter with art not even bring us closer to some of these «truths», unveil realities and provide us with ethical answers? For Levinas also accused art of lacking ethics. For instance, when looking at something horrible, the aesthetic character of art would merely embellish the horrible, in other words, trivialize it. He also sees the escape into another world through art as something negative, because there we do not reflect, but only admire the beautiful. Is this true? Can't a work of art also shake us up, reveal things and encourage us to reflect? And is art really only referring to the past?

The «Aura» of Art

When we talk about art, its «act of creation» is always linked to a form, or to a medium, such as painting, sculpture, photography, film, graphics, writing, language or other imaginable appearances. But what makes art art? After all, «ordinary» everyday objects are also being produced all the time. For this, we go back to Walter Benjamin (1892-1940), who introduced the term «aura». The word is meant to express that the work of art possesses something unique and authentic. However, this something is difficult to grasp, which is why the term is feared in the still young discipline of art history, also because Benjamin did not really define the aura. In this veiled/shadowy nature of the aura, however, parallels can be found between Benjamin and Levinas. So how is an aura created when we look at art, or rather who or what creates it? Benjamin explored the aura in his essay «A Short History of Photography» (1931). It is something non-linguistic that is transferred into the present world, something that transcends from a «here and now» into a «beyond»:

“What is aura? A peculiar web of space and time: the unique manifestation of a distance, however near it may be. To follow, while reclining on a summer's noon, the outline of a mountain range on the horizon or a branch, which casts its shadow on the observer until the moment or the hour partakes of their presence - this is to breathe in the aura of these mountains, of this branch.” (SHP, translated by Stanley Mitchell, p. 20)

The «peculiar web» is thus interdependent to «space» and «time» and is by this a transient moment. But this does not exclude the here and now. The word comes from the Greek and means «whiff», «breeze», «wind». So, the aura has a tangible effect or radiance. Benjamin transfers this invisible into the pictorial and visible imagination (imago) by describing what he sees, in this case nature. Thus, along with language, seeing also participates in what Benjamin calls aura. The tension comes therefore from the fact that the invisible aura in its whole experience is coupled to the conditions of perception and is part of the visible world. The aura moments are transmitted, mediated, reproduced and as a result can be experienced through language. The aura is bound thereby to our cognition, can slide over thereby from the «beyond» into the «this side» and therefore becomes a single experience, for which the human being can open his eyes.

Experiencing the Sensual Through the Vision

The aura thus possesses something like a religious character, something «holy» that expresses itself, but at the same time protectively preserves this inexplicable, precisely this near distance that shows itself as a foreign-looking and unapproachable radiance. As Kant described, this distance to the beautiful creates an admiration that can be experienced as a feeling within the subject and can even trigger fear. The encounter with art seems to stimulate us to think. Is art even the origin of our thinking (cognito)? For «beauty» has always existed. Also, for Kant, a «sensual» experience, in other words an experience in which we are afflicted by something, occurs through the sight of an object. Consequently, sensuality is bound to thinking, to our understanding, and thus dependent on our experience. Vice versa, our mind is dependent on the five senses. This enables us to develop or use concepts in sensory experiences. Kant calls this profound effect of an object on our ability to conceive «sensation» (cf. Kant, CPR).

Thus, a reciprocal exchange takes place. Hence the Kantian conclusion: «Thoughts without content are empty, views without concepts are blind» (Kant, CPR). The auratic/the eerie/the sacred thus seems to arise from the fact that we lack words when something touches us. We cannot grasp the beautiful, the realization remains, so to speak, conceptless and thus inaccessible. This uncertainty, this restlessness also seems to trigger the interrelation between art and society. Art, or rather the aesthetic experience, thus possesses the power to transform us. And this is precisely because sensory experience cannot be properly grasped. For Levinas, reality itself is something dreamlike. Thus, only the effect/sensation is real and can change us accordingly. His attitude towards art is therefore not only dismissive, as was said at the beginning: «It is a creative perceiving» (orig. «Es ist ein kreatives Vernehmen», Bennke, p. 99), whereby something is made visible, but still retains parts of the invisible. Art, then, is a referring, an irresolvable phenomenon: «The image thus not only occupies a medial position, it is the medium of representation» (orig. «Das Bild nimmt damit nicht nur eine mediale Stellung ein, es ist das Medium der Darstellung», Bennke, p. 100). And with this, art seems to reveal the ambiguities of the world.

A Breeze of the World Beyond

The (art) experience is thus the result of an interaction, a dialogue between the human being and his environment. Neither can come into being without the other. The dialogue places itself in an intermediate space, between the you and the I or between the you and the It, which is maintained by a bodily separation. The reaction that is triggered in the other and in us forces us to self-examination, to reflection, to introspection. The human being also experiences confirmation in which something touches him, whether physiologically or psychologically. The stepping back into the thoughts, the distancing, is necessary in order for us to be able to look at something in a new way, similar to a pendulum movement (Martin Buber). For something to touch us, the growth of trust and intimacy through time and experience is necessary. In this process we approach the complexity of the constant and never-ending enigma. There is thus a potential in the encounter, something is emerging, a possibility is being explored. Also, enduring certain feelings, especially the feeling created by the inevitable distance, allows us to acknowledge the mystery and at the same time fuels the desire to explore it.

With this, we have made an attempt to explore where these emotions come from when we look at art. What seems to be decisive is the relationship between distance and proximity, our physicality, cognition, our gaze and our senses. And here the parallel to the interpersonal encounter becomes clear, when we look at art, which has been infused into the artwork by the experience of the artists, which in turn is absorbed by the other person: «To encounter a human being is to be kept awake by a riddle», Levinas aptly wrote. Something surrounds another human being that we can never fully comprehend as his or her opposite; it remains shadowy, just like Benjamin's notion of aura. But does art, according to Levinas, therefore remain without a future? Because feelings and emotions seem to persist over time, and can even affect us in a new way. Precisely because of this, we deal with the future, allowing it to be influenced. On the one hand, the existing of the object refers to the past, but it also constantly escapes from the essence of the object. Thus, the motion of being also points to the future. The incomprehensible distance therefore exists in both directions. This enigma surrounding the essence of an object/the self is not representable, but only arises through the encounter with the other or with the work of art. The shadow, the trace of one's being is the work of art and touches us for this very reason. This also seems to be our drive to produce art and to let ourselves be touched by the encounter, to try out the various facets of the enigma, even if something always eludes us.

Imago: The word comes from Latin and means «image», «likeness».

Cognito: The word comes from Latin and means «realization».

Reciprocal: The word comes from Latin and means «mutual».

Ambiguity: The word comes from Latin and signifies «more than one meaning». A sign can therefore have several meanings.

Art and Culture in the Media #10 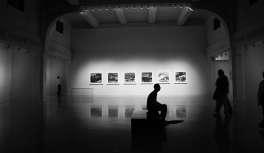 Art and Culture in the Media #9