A chance to digitally visualise and preserve lost cultural heritage and a way to remember art that has been destroyed.

Last month's blog post «Conservation of endangered cultural assets and the protection of cultural heritage» focused on the measures and supporting organisations that intervene when the existence of cultural property is threatened, as it is currently happening in Ukraine. This article follows up on that topic and discusses the way of preserving already destroyed cultural property digitally.

The latest techniques prove that destroyed art and cultural heritage can be brought back to life. By using 3D reconstructions, they can be made visible again, even though they no longer exist. Based on photos or 3D scans, 3D models of a cultural asset can be created and experienced again by the viewer. Rediscovered ruins, destroyed historical scriptures, Egyptian and ancient Greek temples, monuments, medieval frescoes and much more can be reconstructed using the latest techniques.

In 2015, significant cultural goods in the ancient ruin city and UNESCO World Heritage site of Palmyra were destroyed by IS. The Baalshamin Temple, which now no longer exists, is to be digitally reconstructed as a 3D model based on plans and 2D images by researchers from local and European institutions and universities as well as tourists. The «Mosul Project», which was explicitly launched for the digital restoration of already destroyed heritage in Syria, also attempts to create digital models of the original pieces with the help of crowd-sourcing images. This not only enables the digital preservation of the cultural artefacts, but also enables the further use of this digital reconstruction for the later restoration of the destroyed property. A French research team has already created realistic 3D models using drones and 3D technology to digitally recreate destroyed cities such as Palmyra and Mosul, at least digitally. 3D reconstructions of the Al-Nuri mosque in Mosul, which was destroyed in 2017, and the amphitheatre of the ancient city of Leptis Magna in Libya are just two examples of realised 3D reconstructions.

In collaboration with UNESCO, the research team is planning to start the reconstruction of the largely destroyed Syrian cities of Aleppo and Mosul. Another digital 3D reconstruction by the University of Applied Sciences and Arts Northwestern Switzerland FHNW of the triumphal arch in Palmyra, which was demolished by IS, can be admired on YouTube.

In addition to digital restoration, 3D reconstruction also enables comprehensive documentation and creates a new understanding of space, as did the case with the tomb of Hairan in Palmyra, among others. Using 3D models, a new understanding of the inside and the overall arrangement of the tomb was generated and the relationships between painted decoration and architectural surfaces were made visible. As part of the «Palmyra Portrait Project» at Aarhus University, more than 3,700 funerary sculptures have been digitally documented since its start in 2012. Among them are the Roman portrait sculptures, which belongs to the largest collection in the world.

In the course of the «Scanning for Syria» project, destroyed archaeological objects are to be reconstructed using 3D scans. Important cultural objects that were lost during the Syrian war could be reconstructed this way. For example, over 3,000-year-old clay panels from the Assyrian Empire were copied using existing historical silicone casts of the originals with the help of 3D scans. Also, the 6th century Buddha statue destroyed in 2001 and its surrounding niches and caves were realised in a virtual 3D model of the RWTH Aachen University thanks to historical documents and drawings.

In addition to the violently destroyed cultural treasures, 3D reconstruction can also be used to visualise ruins and to make inscriptions on wall paintings readable. An example of this is the ancient ruin city of Afrasiab, now Samarkand in Uzebekistan. In 1965, remains of the ruins were rediscovered, as well as frescoes from the 7th century dating back to the Sogdian era. The visualised wall paintings and inscriptions revealed that the city was considered as the most important international centre at that time.

An European example that will most likely make use of 3D reconstruction is the future rebuilding of Notre-Dame in Paris. The historic cathedral was largely destroyed by a fire in 2019. It is likely that a 3D model will be created based on photos, historical architectural and floor plans as well as scans. During the current war in Ukraine, the Kuindzhi Art Museum in Mariupol was destroyed. The Danish UNESCO National Commission and Blue Shield Denmark now want to use 3D scans to achieve at least the digital preservation of the endangered cultural assets.

Modern 3D technology makes a lot of things possible: it creates the impossible by bringing cultural goods that no longer exist back to life, even if it is only digitally. It ensures that destroyed cultural heritage is remembered and not forgotten. It not only offers digital preservation, but also creates new information for archaeologists and researchers.

An exact and authentic reconstruction in-situ and the creation of precise copies of original pieces becomes a reality through it. Last but not least, it shows the possibilities offered by the latest technologies and how significant and important collaboration between research experts, conservators, archaeologists, art historians and technicians can be. 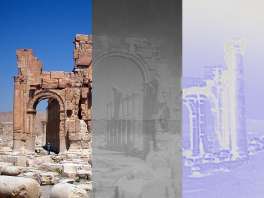