"In the heart of art": a visit to the studio of the Lucerne artist Paul Louis Meier

What kind of places are these where works of art are created? Where ideas, visions, designs, sketches, first drafts are quietly waiting to be carried out one day? Where finished works and smells of different materials give the rooms their own atmosphere? Visiting such creative places is "pure goosebumps. When you are allowed to dive right into the world of artists, processes of creation as well as their statements become more comprehensible, more obvious, clearer, and approaching them becomes easier. The visit to Paul Louis Meier "in the heart of art" in his Lucerne studio reveals this experience once again.

When we stand in front of finished works of art (in exhibitions), everything looks fully developed, perfectly implemented and staged. The long, often rocky road from the first fleeting thought to the realization of an artistic idea, on the other hand, is kept from us. Time-consuming, exhausting creative processes, mishaps, difficult realizations or even unrealizable ideas that have to be revised again are hardly revealed. On the way with Paul Louis Meier to the entrance of his studio, many thoughts already accompany me. There, "in the heart of art", lie answers and "eye-openers" to the understanding of his artistic intentions.

The larger-than-life bronze sculptures in the idyllic, peaceful front garden are inviting. Like ambassador figures, they inspire to associations in silent dialogues. What are they "talking" about? "Are they "walking" towards each other and why? Or are they to be understood as guardian figures that mark, limit, guard the entrance to the studio?

Inside the bright studio, the artist's exploration of people becomes visible and palpable. Everywhere. The whole room is populated. In plaster models of various sizes or as clay figures to be worked on, wrapped in plastic sheets so that they do not dry out. As three-dimensional or "halved" single resp. pair or group figures on small or high, round, angular, u-shaped pedestals, standing, walking, lying, bound in circle or arc shapes or mounted on spheres... the human being in all` his facets. Just like in real life. Sometimes alone, sometimes in a group, sometimes in a dialogue as I and you or as I and the other, but also in numerous examples where the other person turns away.

An exciting human panopticon is what continues in the next barn room with larger works. Predominantly (larger than) life-size plaster and bronze figures, each individually shaped, cast a spell, invite close observation with their shadow play or demand respectful distance. Each one of them has its own individual story of origin and each one of them sends out different associations. Which one do I like at this moment, which one will I like later? What or whom do they remind me of? Why do some seem rather uncanny to me? A silent dialogue between them and me has long been going on....

Paul Louis Meier is a keen observer. One who studies his human environment, records it, interprets it, reproduces it in sketches, designs, drawings, and finally in sculpture. In each and with each figure or group of figures, worlds of I, you and/ or us are reflected. The question is: Does it remain with the I or the you? Or does a work become a (harmonious) us with different views of the world? It is exciting to be able to see from work to work how the artist expands the space for possible interpretations with the finest graduations in gestures, body or head posture.

Large-format papers with human silhouettes and drawn figures lean against the walls. On a table, a stack of sheets with fluidly sketched, graphic ideas and studies provides insights into figurative creations or thoughts that are (eventually) further developed. Until they are fully developed as drawings that complement the three-dimensional work of art, expand its space or mirror it graphically. It is fascinating how Paul Louis Meier brings together the two medias of drawing and sculpture, explores or expands their possibilities in dialogue or multi-part works. For example, when the drawing applied directly to the rigid, static bronze figure gives the cool metal a vibrant, living surface. Where does the drawing end, where does the three-dimensional object begin, and vice versa?

And suddenly it also becomes clear how the artist creates space for the figure in various ways, limits or expands it. Between drawing and object as well as in the inclusion of shadow casts or the tense juxtaposition of bisected figures, or through the integration of angles or walls behind or next to a figure, which thus determines from which side it is to be viewed.

On this guided, eventful tour with many discoveries and through the wonderful conversation with Paul Louis Meier, it becomes clear once again that an understanding, a recognition and comprehension of artistic processes need time. Just as artistic processes in their own way need time, patience and space as well as a supportive public with exhibition and presentation possibilities in the offline/online area.

Cécile Fuchs (photos) and Martina Kral (essay) thank you dear Paul Louis Meier for the insightful morning in your studio. 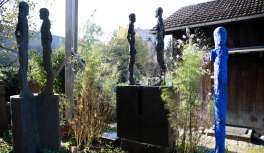 "In the heart of art": a visit to the studio of the Lucerne artist Paul Louis Meier 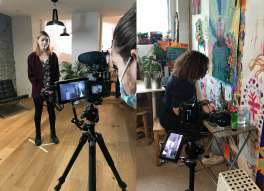