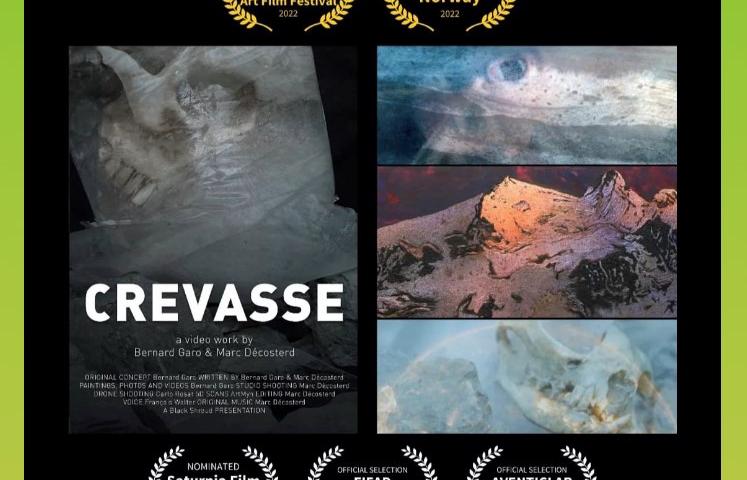 "Crevasse" is a pictorial short film directed by the artist Bernard Garo and his friend and accomplice, the filmmaker Marc Décosterd from Nyon (CH). In a cross-fade mixing computer-generated images and shots on the ground, the film is a visual and musical montage that corresponds to the shared desire of the two authors to illustrate an uncompromising statement, to convey a strong message on change climate and the melting of glaciers.

The images of "Crevasse" link Garo's painting to reality, shake up perceptions: it is an artistic bias in the form of unique dives into the matter, which were produced especially for video with very high definition scanners (5D) developed by the company Artmyn.com. This exclusive technique practically allows you to walk on the work as if you were moving on another planet.

An innovative sensory journey that reminds us of references in the history of cinema, summoning Bill Viola as well as Chris Marker and Georges Méliès.

Other sequences were made by Bernard Garo himself from digital photos and videos taken with his iPhone and some studio sequences, supplemented by images made from drones piloted by assistants who accompanied the artist in his numerous glacier expeditions. Multiple approaches were necessary, in order to capture the best lights and magical moments sought by the artist to obtain the best plastic effect possible.

A voice-over accompanies the images, deaf and whispered, as if coming from beyond or from the depths of the glacier: it’s the voice of François Walter, professor of history at the University of Geneva, who served as scientific adviser to the two authors of "Crevasse". Captured on the spot, with a camera without a special microphone at the foot of the glacier at the end of one of the hikes, it was transcribed on the soundtrack without modification, except for the erasure of parasitic noises.

The relative difficulty of understanding the commentary is intended: it pushes the viewer to listen, to put themselves in a state of listening and interpretation. In order to facilitate the perception of the voiceover, the text is transcribed in English subtitles – which corresponds to the international vocation of the film, these subtitles can easily be transposed into another language.

The human presence, that of Bernard Garo, is evoked implicitly at the beginning and at the end of the film. At the start, when entering the world of ice, rock and painting; and in the end, when the man left on earth is abandoned to his fate, with the only possible resistance the artistic gesture. The imagery of the paper stele, which Bernard Garo walks around without the whole world, is the metaphor of our vulnerability and of the time which passes inexorably. 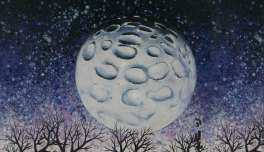 Magic, Myth, Fantasy - Surrealism in Art and its Impact to this Day 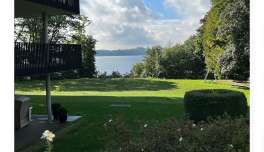