Impressions of the Unlimited exhibition at Art Basel 2022

Every year, the international art fair Art Basel takes place, serving as an exhibition venue and sales platform for international, influential, innovative and renowned galleries. On 17 June 2022, art24's art team visited the fair to gain on-site glimpse into this year's prevailing art market and discover the pioneers of the art world. In addition to the galleries, curated presentations of selected artists from the galleries represented at Art Basel were shown as part of the «Unlimited» exhibition. 70 contemporary artists of the 20th/21st century exhibited their art here: An overwhelming mass of impressive, narrative productions, consisting of sculptures, paintings, installations, video projections, etc., was presented.

This year, too, we were impressed by the individual artworks, which often took up socially, historically and politically critical and/or feminist topics and stimulated an important and necessary dialogue. Whether it was Yee I-Lann's (*1971) installation «Tikar/Meja» (Gallery Silverlens) of 60 Bajau Sama DiLaut weaves symbolising the overcoming of colonialism and patriarchy, the oversized bronze figure of a black woman entitled «Moments Contained» by Thomas J. Price (*1981) (Gallery Hauser & Wirth), which focuses on the «underrepresented», or Francis Alÿs' (*1959) series of works «Border Barrier Typology» (2019-2021) (Gallery Peter Kilchmann), which show images of fences of national borders such as France and England, but also Ukraine and Russia, or Israel and Syria, and thus, possibly unthinkingly, captivates by its topicality.

It's a mass of discussion-provoking art that is showered on the visitors. It therefore seems impossible to deal with each work of art in the Unlimited exhibition individually.

However, in the following we will shed light on particular works. During the visit, we quickly realised that the artworks did not only stand for themselves, but that the visitors could also become part of the artwork. They did this by perfectly matching the colours of the exhibited works and thus integrating themselves into the showroom. The colour matching was done naturally, without being staged by us. None of the visitors were approached by us or posed consciously for the photo. Some visitors appeared several times in our focus, as they unintentionally matched the colours of many of the artworks presented.

In the following, we would like to take a closer look at these works of art, which have now become virtually «interactive»:

Right at the entrance to the Unlimited exhibition on the right-hand side, you reach a picture wall entitled «Wigs II» (Gallery Hauser & Wirth, Booth U69) by the artist Lorna Simpson (*1960). More than 20 pictures show a wide variety of hairstyles, photographed from behind and on a plain background: curly, braided, straight, wavy, long, short, dark and blond hair wigs are lined up picture after picture. They are accompanied by small texts that entertain, telling about drag, but are also dealing with slavery and violence. The visitors are invited to tell stories behind the different hair styles. In her works, Lorna Simpson often addresses the history of African-American hairstyles and society's beauty norms. In the «Wigs» series of works, she explores the social and political significance of hair: from the stigmatisation of black hairstyles to the cultivation of natural hair as a way of empowering POC. An importantly conducted dialogue, which we are fortunate to be able to address here because of the young visitor with voluminously curly hair against the backdrop of the hairstyle wall (Fig. 1). Her head almost disappears and merges with the pictures of wigs hanging on the wall.

One booth further on, you are led into the showroom of Gallery Thomas Schulte (U68), where the kinetic installation «Bee's Planetary Map» by Rebecca Horn (*1944) is staged. The work, created in 1998, consists of hanging round straw baskets representing empty beehives. The loud buzzing of a swarm of bees can be heard from loudspeakers. The warm light shining from the beehives is reflected onto the walls by the round mirrors on the floor. Paving stones fall from the ceiling onto the mirrors and shatter them. The German artist's work was created during the prevailing Balkan war and is intended to address topics such as uprooting and dislocation. Motifs such as the fear of freedom and belonging as well as the desire for protection and security represent essential intentions of the artist. Even though the beehives are empty and only the sound of buzzing bees can be heard, the lady with her yellow-coloured black dotted dress in the middle of the «bee planet map» enlivens the scene (Fig. 2). Even though the dress does not symbolically represent the yellow-black stripes of a bee, the black dots on the dress look like the missing swarm of bees buzzing around in the summer meadow.

Diagonally opposite this art installation, the view leads to a room full of monochromatic pictures. 40 differently dull-coloured, pastel, dark-toned and shiny coloured surfaces line up in this showroom. The work «R R Variations» by the Dutch artist Jan Dibbets (*1941) of the Galleries Konrad Fischer / Peter Freeman (Booth U62) is based on the paintings of his artist friend Robert Ryman (*1930) and is intended to honour this artist, who has since died. The colour concept provides a wonderful setting. Every visitor could probably find themselves here in terms of colour. Two particular examples are shown below (Fig. 3). Attention should be paid to the lady in floral dress, who appeared in our field of vision several times.

Just around the corner, you will find the artwork «Food for Thought "World Map"» (Fig. 4) by the Saudi Arabian artist Maha Mullah (*1959), represented by Galerie Krinzinger (Booth U58). This work consists of numerous coloured video cassettes, which are put together to form a pictorial map of the world. The largest country in the world, Russia, can be seen in pink. In addition to the large pink surface, the blue colour of the surrounding sea occupies another dominant-coloured part of the work. Miraculously, a young woman in an equally pink and blue garment appeared in front of us at the same time as we were looking at the work (Fig. 4).

Further down the corridor, the chamber installation by the Italian artist Michelangelo Pistoletto (*1933) can be found in Booth U18 of the Continua Gallery The work «Porte Uffizi» was conceived in 1995 and consists of a chamber-like architectural structure. Each «chamber, indicated by narrow delimiting wooden beams, is dedicated to a cultural category. Above the «doors», which act as a kind of portal leading into the individual open chambers, are the various categories such as «Rights», «Politics», «Communication», «Sport» or «Architecture». In each of these rooms, a work by the artist is installed to illustrate the theme. In this way, humanity is encouraged to reflect. People should be made aware of their own responsibility as well as being addressed with regard to issues such as the environment or the community. And again, the installation offered spaces that matched the colour of the dressed visitors. In a short time, the spectators unintentionally assigned themselves to their matching coloured spaces such as red, pink, blue and green and the photos were quickly taken (Fig. 5).

Opposite, a room-sized, monumental sculpture made of aluminium sheet and partial elements painted with car paint filled Booth U53 of the White Cube Gallery. The dominant grey-toned work «Dimension» by Liu Wei (*1972) is wonderfully complemented by the grey dress of the visitor (Fig. 6).

A few metres further on, one arrived at the showpiece by German artist Raphaela Vogel (*1988): «The (Missed) Education of Miss Vogel» (Gallery BQ, Booth U46). Dark lettering and paintings adorn the suspended animal skins. The images and texts are meant to represent the knowledge the artist has learned and desired. A piece of a yellow-coloured skin with a dark-coloured writing pattern could be seen in a similar way by chance on the young visitor's dress (Fig. 7).

Further down the corridor hung the painting «Isla (elegía)» by Cuban artist Yoan Capote (*1977), represented by the Contunia Gallery (Booth U43). The painting, composed of thousands of fish hooks, inspired by the painting «Monk by the Sea», painted by Caspar David Friedrich, seems threatening but also beautiful at the same time. The waves pile up in front of the viewer like a high barrier. The work symbolises the pain, the risk and the horrors on the water that many migrants have to experience during their escape across the sea. The dull tones of the yellow-grey sky, which brightens up on the horizon,, and the dark colour of the deep sea shaded in a similar way on the clothing of several visitors (Fig. 8).

On the back wall of the painting by Yoan Capote was the room-filling installation «Not Since Superman Died» by artist Jim Shwas (*1952) (Gagosian Gallery, Booth U42). Large banners hung down from the ceiling to the floor. Visitors could walk around the banners and look at both sides of the picture. On the front, Superman, the heroic figure, was painted in various postures in black and white and in comic style after Wayne Boring (*1905). Other pictorial components are inspired by the drawing «Evening (The Fall of a Day)» by the painter Wiliam Rimmer (*1816). The background as well as the back of the banners are designed with park elements of Central Park. The work depicts Superman, the otherwise invulnerable and invincible heroic figure, here as an ordinary mortal who experiences pain, weakness and dying. The moment when the woman in the floor-length, wrinkled and draped white dress stood in front of the numerous banners hanging down in equally long lengths of cloth had to be caught on picture (Fig. 9). A sun hat with a wide thin fabric complements the airy outfit.

It's hard to get past the golden, shiny, metre-high work «Winter is Coming» (Gallery Urs Meile, Booth U3) on the far wall of the exhibition. A fortunate coincidence that just at this moment a young visitor in a dress of the same colour turned around in our direction (Fig. 10). This now gives us the opportunity to present the special work of art in more detail in the context of this blog post. Over a wooden panel, the artist Ju Ting (*1983) applied more than 70 layers of acrylic paint and hammered holes into it to expose the numerous layers of brightly coloured paint underneath. In doing so, she gave free rein to her frustration about the restrictions and the loss of contact exchange with other people during the Covid 19 pandemic. The Beijing-based artist exploits the malleability of acrylic paint at different temperatures, playing with the effects of surface and texture to create painterly-sculptural works.

Opposite the radiant work is a modern sculpture by the French artist Anita Molinero (*1953), represented in the Christophe Gaillard Gallery (Booth U40). The work «Vivasse» (2022) is composed of green-coloured polyethylene containers that climb upwards like weeds and almost like monsters. The artist uses everyday objects made of plastic, such as here waste bins, which she deforms and alienates into sculptures. Since the older chic lady in her floral clothing has accompanied us from artwork to artwork all day, she cannot be missing from the last work presented: The dark colour of the leaves and plant stems on her coat now stand out more strongly due to the dark green plastic sculpture in the background (Fig. 11).

The «Swiss Textile Collection» exhibition at Forum Würth Rorschach in 2016/17 showed that art and fashion are closer than expected and cross-fertilise each other in terms of motifs and colouring.

After a day of admiring art and visitors, we left the Unlimited exhibition to visit the galleries' showrooms one floor up. Here we were overwhelmed by completely different questions that arose, such as about the presentation concept of the Art Basel art fair, especially in comparison to art24, the online platform for fair art trading: Are we actually in competition with the recognised international fair? What advantages does an online platform have that an art fair cannot offer?

Glad to have been part of this year's visitors, we look forward to next year's Art Basel. 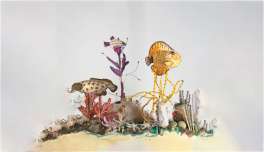